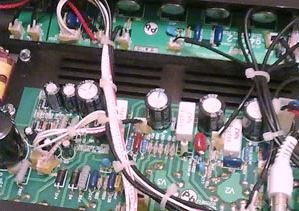 …that vanish as soon as you go looking for them!

As well I know from my experience as a physicist, poking around with large amounts of electricity can be as much fun as it can be dangerous and scary. Particularly with high powered laser systems where high voltage, high current, and running water (for cooling) are often in close proximity. Guitar amplifiers are pretty tame in comparison so I have no problem opening them up and poking around. 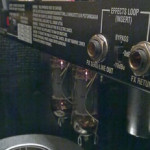 While I won’t call myself an amplifier technician, I am perfectly happy to change and bias tubes, troubleshoot and diagnose faults, and replace components if need be. But whether it’s lasers or amplifiers, sometimes what seems like the most trivial or straightforward of issues can be a minefield to navigate. And some issues are intermittent and can never be made to appear when you want them to.  And then there are those problems that just make you shrug your shoulders and say “well ain’t that the darndest thing”!

My beloved little Laney LC15-110 recently had slightly scratchy volume and treble controls that over the course of a few months started getting worse and even very annoying. So I figured I’d open it up as such a simple issue can only be simple to resolve. I’d make sure the solder joints were good, clean the pots if necessary and if that didn’t work, I’d just take them out and replace them. It’s an easy job – high success rate, low failure rate, not particularly dangerous or time-consuming. 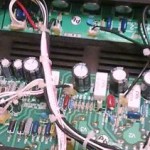 So I open the amp up, plug it in, fire it up and start testing. I twist and turn the controls, wiggle, poke and prod, and they behave perfectly! Not a crackle or scratch to be had, working as smoothly and quietly as the day I bought the amp, as if the last few months of scratchy noises never happened!

I gotta tell ya, I’m stumped as to why! I’ve researched the possibilities (static, leaky coupling capacitor, dirty post) but consistent and progressively worse over the course of months that vanish when I opened up the chassis? Weird!

Any ideas? If not, feel free to share any similar stories?

If you liked this page, tell your friends...

DrKev will teach you Guitar